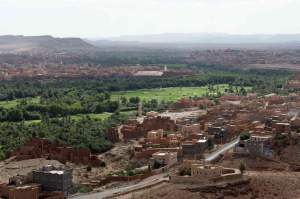 There is a different Morocco south of the Altas Mountains. Travelling through the ancient villages, towns and cities over the last 4 days has reshaped our impressions of this land. The landscapes; desert and semi-arid are stunning … even Maria’s lens prowess has been powerless to capture even the essence of the grandeur and romance.


One of the cities we have visited is Ouarzazate. The main industry in the city and the region is film. It seems that any film that is either historical, religious and/or requires vast barren landscapes either flat or mountainous and associated urban environments, has been shot here. Gladiator, Cleopatra, Babel (set in Afghanistan), Biblical stories too many to mention, Alexander … the list goes on and on. More than 100 films have used the location in this area. And it makes sense. For the last 4 days it feels like we have been driving through a giant film set, it is so unreal and mysterious compared with Brunswick East. We have become nonchalant about scenes that a few weeks ago we would have gone into raptures and blogged passionately about … such has been the avalanche into our senses. 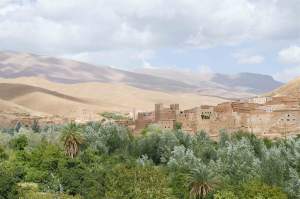 One particular piece of ‘film set’ that has been etched into our memories and psyches is the roads. We would be driving up yet another set of hair-raising bends and Hamou would say, “this is where Land Rover shot the adds they played during London Olympics". Or “this is wear the ambush scene from Babel was filmed’, or more soberingly, "you can see the debris there from where the bus fell down the cliff last month" (40+ people died).


I am a poor passenger at the best of times, so I am really grateful that Hamou was a safe and very competent driver. Because if you had told me yesterday morning that we would be driving most of the day along roads and mountain passes that back in Australia 10 minutes of which would have you sweating … then I think I would have suggested an alternative route. 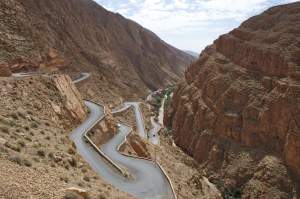 We set off in the morning along what is called the ‘Salt Road’, so named because of its use in ancient times as a trading route. Deep in the mountains is a ‘salt mine’ that local people traded with gold. Long ago they were of equal value. The salt road wound through villages, through gorges, and along mountainsides. Narrow winding roads with edges only feet away from massive drops. After a while you just had to stop thinking about it. Hamou explained that it only had bitumen on for 12 months, before then most people were too scared to drive on it. I figured most people I know would be too scared to drive on it now!!! The problem of course is not so much the care and competence of the driver, but as much the unknown of what other vehicle might be coming around the blind corner and at what speed and position on the road. 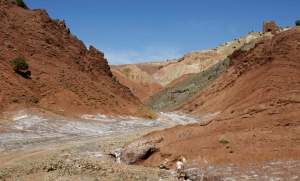 near the salt mine


At nearly every turn the vista demanded a photo and when it was safe, Hamou would pull over to the side of the road, often with the wheels on the verge of the edge and invite Maria to do her thing. He was always looking out for places where oncoming or following vehicles could pass safely. One of the things that made him such a good driver was his natural inclination to be vigilantly observant about what was ahead and around. He would pick things out in the countryside that we would easily have missed (travelling nomads in the distance) and a rock trail used for trapping rabbits, different kinds of plants / trees, lizards and birds, as well as road conditions and vehicles.


Morocco Explored, the company we travelled with, would not have included the route if it were not safe. For sure, we encountered quite a few four wheel drives along the way (there were major sections of the road – in the valleys – that could easily have been classified offroad). But the risks for people who are used to the safety standards applied to road design and construction in Australia and the associated expectations of risk, felt pretty real at the time.


After hours and hours of driving (and I should say that the scenery was simply extraordinary) we reached the main road that would take us back over the High Atlas Mountains into Marrakech. If we thought we could relax, with the prospect of some different roads, we were gravely mistaken.


Yes, the roads were better maintained and slightly wider, but now there was major traffic in both directions. Buses and trucks included. I was thankful that we got stuck behind a long line, it meant that we were taking it slowly, very slowly in fact, and it also meant that oncoming traffic would encounter other vehicles before us. Amazingly, local drivers continued to overtake and weave through the crowded lineup. Breathtaking – literally as we held our breath, ooohed and aaahed. 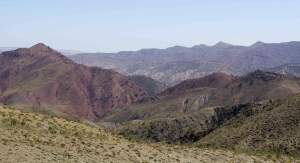 So, eventually the road began to straighten as we hit the plains between the High and Middle Atlas and Marrakech approached. We farewelled Hamou, who we had come to like immensely in the days he had been our driver, guardian and guide. A couple of days earlier we had driven through his home village, so we had stopped and had a ‘tour’ and the obligatory mint tea with his mother. We learned about twin kitchens (traditional and ‘fast food’ ie western, both outside) as well as seeing how every family has donkeys, sheep, goats, fruit trees, etc in their backyard. Enthralling.


So much of what we have learned about Morocco has been from him. He has offered us four days of commentary on so many things we have observed along the way, really interesting stuff we would have completely missed without him. Thankyou Hamou. 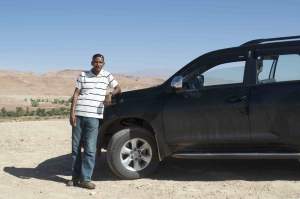