Like all other parents, when our children were younger, ‘holidays’ were hard work. We bought one of those big family tents and loved the change of scenery that camping offered. We stayed in some beautiful places around Victoria, and as is often the case, family memories were made among wind, rain, dirt, open fires and sunshine.


I had not taken any extended leave since leaving uni and starting work, so when we loaded up the four kids, (Johanna was just three), and headed north for a six week Queensland holiday at the point of a career change, we were very grateful and excited. We had a great time, in what is a bit of a rite of passage for Victorians ... take the family to QLD. That was 2001; we were on the Gold Coast at 9/11.


A few years later we were back in QLD but this time would mark a change. Although we had holidayed before, this one would have a profound positive impact on us all. We used frequent flyer points to fly to the Sunshine Coast at Easter 2004. It was a turning point trip for us. We sat in a pizza joint in Hastings Street in Noosa and had what felt like adult –type conversations with our children. Some families reportedly struggle with the teenage years -  we loved them. I also had my first taste of surfing on that trip. I had always regretted not learning to surf when I was a kid … in this season of life Maria and I had made a commitment to fear regret not failure.


We returned home to a new look house .. we had renovated our kitchen over the summer and had ripped up all the old brown carpets and had the floor boards polished while we were away. We had not been able to afford any maintenance on the property for the previous fifteen years, so although cosmetic, a spruced up house – a functional bathroom and nice new kitchen lifted our spirits.


We loved Noosa, despite the tourist mecca it has become, as a simply extraordinarily wonderful place to hang out at the beach, it had a special place in our family memory. So much so that we returned in September 2005 for two weeks … we had no transport, but Maria had secured an affordable apartment in Hastings St. The weather was really ordinary from memory, but we had another amazing time together.


Then over the summer in 2006/07 we had what may have been our best every holiday. I can still recall the feeling of complete bliss, standing in the aisle of the plane en route to Perth, watching the family relish that holiday excitement. Over five weeks we clocked up some kilometres in our rented Tarago, from walking through the forests down south to swimming with the dolphins at Monkey Mia up the coast. The kids will recall our Christmas Day at Monkey Mia as one of the most memorable we have had … sitting on the grass around a tub of ice cream … bogging in for Heidi’s birthday.


By this time we were expecting the kids to start to loose interest in family holidays. But something deeper had begun to stir in us. Something that wasn’t so much about traditional holidays, it was about embracing life to the full.


In November 2008, Johanna, Rachel, Maria and I went for a bike ride in Williamstown. We were resting in a park across the road from the beach, sitting on the rocks at the edge of a flower garden. It was a perfect spring weekend day. We talked about life and especially lifestyle choices. We wondered aloud about what it would be like to choose something different that enabled us to ‘sit at the edge of a rock garden’ more often. Not surprisingly, the girls liked the idea of escaping the school routine.


About the same time, Maria’s cousin Darren was diagnosed with motor-neuron disease. Darren was fit, healthy and adventurous. He was a typical strapping Aussie bloke. He and Maria were the same age; they had played together as kids and had become adults in parallel. Darren’s inevitable spiral into increasing disability affected her deeply. (see link to a blog here after his death in June 2010)


We had already adopted what we described as our ‘no regrets’ policy. Our circumstances, owning our own business and our family’s increasing independence, offered us a precious opportunity to make some choices; choices to embrace a lifestyle that could easily have remained a wish, a fantasy or a dream. We wondered about the wisdom of living fully in the present. Prudent society exhorts us to use this season of life to plan for retirement … ‘then’, so the mantra goes, ‘you can live your dreams’.


And so we began dreaming about what choices we could make to live fully now. It wasn’t about escape, and in particular it wasn’t about quitting work. I love my work and have been an advocate for meaningful work for many years. (see link to Vocate site) For a few months the thought of ‘why not?’ could not let us go. Our initial plan was to try to take a year out and travel around Australia ... as many people courageously do. To this day I have never met anyone who has regretted the decision to do something like this. But we struggled to figure out how to make it work; Zac, Heidi and Rachel were at crucial stages in their high school and uni education. And so we stumbled on what we have discovered to be a better plan … at least for us.


Rather than take one mammoth chunk of leave, what would it look like to actually change our lifestyles so we integrated what people experience in their ‘year-long’ excursions, into every year. How could we do it? Would it be possible? We thought ‘yes’.


And so we started scouring the trading post for second hand caravans. We travelled far and wide across the state, on one occasion driving for three hours and knowing as soon as we saw it that it wasn’t for us. In contrast, a three hour drive in another direction -  we took one look at the Regal, and knew it was our van.


But we had to tow it with something. Maria’s sister had had an old Patrol sitting in her garage for a few years … we were delighted to buy it, spend (quite) a few dollars on it and we were ready to go. We collected the Patrol (affectionately christened ‘Pat’), towed the caravan home in driving rain, booked it into a caravan park in Inverlock for a ‘shakedown’ at Easter 2009 where it blew a gale and poured with rain … and we were hooked. Our yurting journey had begun. 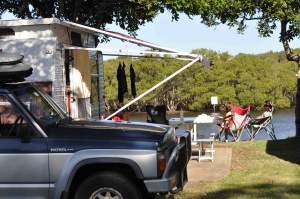